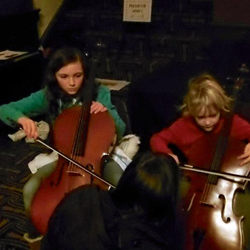 On Sunday, April 17th, members of the Ann Arbor Symphony Orchestra (A2SO) weren't the only ones to perform on their string instruments in the Michigan Theater. If they arrived early, kids and their families from all across Ann Arbor and Washtenaw County got a chance to touch and interact with the instruments they would soon see on stage. Along with this instrument  "petting zoo," families made their way around the atrium to visit tables set up by community partners such as the Girl Scouts, the Purple Rose Theater Company and the Ann Arbor Hands on Museum—where staff members were on hand to help with arts n' craft projects such as constructing their own parachutes. The concert itself featured a variety of music that reflected themes from around the world, such as Ginastera's Estancia as a way to explore South American culture and Akpabot's Three Nigerian Dances as a tribute to African culture. A highlight of the concert included a performance from 14 year-old violinist, Adé Williams, who stunned the audience with her incredible concerto in her first performance with the Ann Arbor Symphony Orchestra. Several times a year, the A2SO Family Concerts Series continues to show its commitment to youth music and education in Ann Arbor. –MO 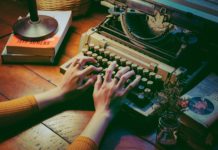 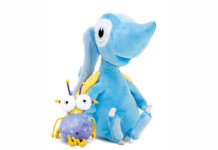