She spends time tending to her garden, collecting seeds, giving to others, and building a house.

Sindi Keesan is known affectionately by some as the “Neighborhood Tomato Lady.”

She grows a plethora of various tomato varieties for the seeds and also shares the fruit with her friends and neighbors. She even manages to donate tomatoes and other grown food to the hungry.

“I give tomato fruits and seedlings to anyone visiting us who does not refuse them,” described Keesan. “I share the prettier ones. Colors include red, dark orange, light orange, gold, light yellow, green, purple, pink, indigo, browns, stripes, bicolor. Often people want to grow in pots so I grow some dwarf varieties that stop growing at about 3-4’. Or even 8.”

Keesan’s gardening has also become a recreational, and even an educational, opportunity for some of the neighbors.

“Usually lots of children come through and pick tomatoes, but not this year,” said Keesan, due to COVID. “A very sweet girl came twice this year with her mother — from Vietnam, she came here long ago as a grad student. And we picked tomatoes together. Last year three kids of a food pantry volunteer came every week and liked to pick especially small yellow cherries from a short plant. People are keeping their kids isolated now…. Some years I have given vegetable seeds to people who run school gardens.”

Keesan’s generosity and good-naturedness seem to know no bounds when related to gardening. She also wants to share the art and science of her tomato growing with others. Her gifts have not been limited only to those living in Ann Arbor, and have included not only tomato fruits but seeds and seedlings

“I give seeds and seedlings to ecyclers, neighbors, friends,” divulged Keesan. “Until this year I was sending a lot of seeds, seedlings, and tomatoes to people in the Monroe area who were getting food pantry food from us, but the woman who took everything there has not recovered from COVID-19 since early April. I did manage to send about 40 sheets of 8 selected tomato variety seeds each to her, and some large packets of other tomatoes for another volunteer to distribute, but I have not heard back. I also send them beans, lettuces, and everything else once it gets more than about three years old. Same with ecycle. I sell the newer seeds via Seed Savers.”

According to Keesan, Seed Savers’ Exchange is a US volunteer group based in the Decorah, Iowa area with an annual printed and online list of varieties of seeds and plants, also their own store.  Members list what they have, often with photos.  Non Members can buy from the store, but only members buy from members.

“I charge $1 per variety but the suggested price is $3 to 5,” she describes her Seed Savers’ work.

“Sometimes I get 67 cents via Paypal for mailing seeds that cost $1.10 in postage. I joined them in 1990 with ONE offering — a Hungarian runner bean which I am still growing. When I bought seeds from someone they would often add some more varieties free. A few older gardeners apparently sent me their entire collections free. I tried to maintain them. In 2014, the widow of a large Michigan grower brought me 80 pounds of his seeds to share, which I did for the postage, or cost-free if under $5, which induced other people to send me more free seeds. I need to cut back. This year the garden has helped maintain my sanity.”

Keesan’s knowledge of tomatoes is impressive and it is clear she is willing to put in the time.

“This year I grew out 65 varieties and I have probably grown that many others in the past. I lived in rental housing until 2011, but was gardening in my partner Jim’s yard since about 1990, starting with beans. My first tomato variety that I still grow was acquired from a local tomato tasting at the local food coop. German Evergreen, a medium-sized tomato that is yellowish-green when ripe, lime green inside. I have traded seeds with people at local seed swaps — Ecology Center, Downtown Home and Garden, County Farm park — but mostly via Seed Savers’ Exchange.”

Jim Deigert and Sindi Keesan have been partners since 1983 and housemates since 2011. Deigert has also spent hundreds of hours terracing his yard, building beds of good soil separated by pathways of clay and renewable used bricks or carpet strips, making compost, setting up rain barrels made from old plastic trash cans with a swimming pool pump, et cetera. The city garden tour by bike stopped at their residence. The only city water used in the garden is that saved from laundry, showers, and dishes — and it’s only used during dry spells. Tomato cages come from the curb and are mended. Tomatoes are planted in reused silt cloth to keep out weeds.  Beans are grown on trellises made from the gas pipe.

Keesan also has many other hobbies, many that she shares with Deigert.

“I now spend my time gardening, giving away food and other donated items, selling electronics on Ebay for Kiwanis rummage sale — where we started and ran the computer department in the 90s — and building an energy-efficient house — since 1985. We just built our own windows,”

Keesan has lived in Ann Arbor since 1975 when she was a Slavic Linguistics graduate student.

“…And I have lived here since, apart from a total of about three years in Eastern Europe, and many summers at summer schools there,” Keesan described.

Keesan considered herself a “perpetual student of sciences and then Slavic linguistics until around 1990.

She has also worked as a translator of the following languages: Russian, Serbo-Croatian, Macedonian, Bulgarian, Slovene, Czech, Slovak, Polish, Ukrainian, occasionally Albanian, Romanian, and retired from this a few years ago.

But at times it seems her true love, at least at present, are the tomatoes.

“My rarest tomatoes are accidental crosses that occurred here,” she stated, referring to her garden. “Currently I am breeding two orange cherry tomatoes. They tend to alternate between orange and pink or brown. Tomato color genetics are complicated involving red, yellow, blue, maybe more. Red + Green = Brown. I also have a pink and yellow striped one that was originally purple/pink, and a small brown one that derived from Sungold gold cherry.”

And there is also the work she and Jim do, along with others, to feed those who are in need.

“We are a food bank,” Keesan affirmed. “Ten years ago, Jim noticed that the Salvation Army food pantry was dumping leftover bread, cooked food, peppers, grapefruits, et cetera, in their dumpster on Tuesday and Thursdays after people come for free food. He talked to them and got permission to pick it up. At that time it all fit on his bike trailer, up to about 6 boxes and bags of mostly bread, potatoes, onions, and apples.

Jim maintains they are not a food bank but a surplus food distribution group. The Salvation Army also picks up donated food directly from supermarkets, unlike other local food pantries.

A few years ago they started delivering a van load to our house on Fridays. We have accumulated many volunteers who now handle Tuesday and Thursday without us, including two gardeners from China, a woman from South Africa — ethnic Indian, the wife of a German, a German, a computer friend, and a musician…. They take the food to several trailer parks, student food pantry, Mexican families, Ohio food pantry once a month, et cetera.”

Sindi will soon be busy pulling up frozen tomatoes and beans, and digging up roots and other perennial and biennial vegetables to store indoors over the winter and replant in spring for seeds, also listing over 200 seed varieties with photos. 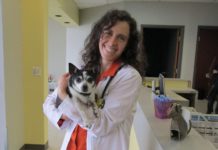 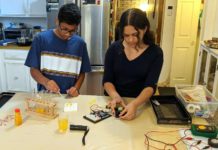 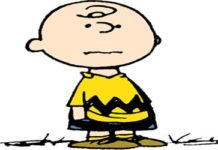