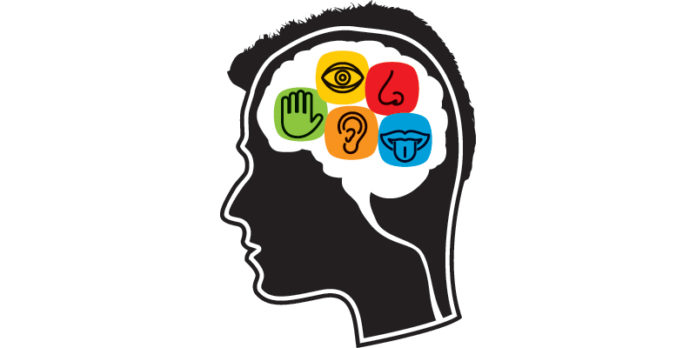 Eyes, ears, nose, mouth, hands and feet. Five senses. It seems like I was just teaching my toddler the body parts and their purposes. Oh, to experience the world through the senses of a child— the excitement, the passion— even about small things.  My daughter, Jessie, is now a tween, but her enthusiastic reactions to everyday experiences still tickle me.

Jessie and I recently spent the afternoon together.  Our first stop was a restaurant, where Jessie sat across from me behind a huge bowl of salad, chatting happily as she tasted the various toppings that adorned the lettuce. I tried something different and ordered chili in a bread bowl. When the waitress brought it, Jessie’s eyes got so wide you’d have thought I won the lottery. “Dad, you’ll always have to order this!”

After lunch, we shopped. Jessie found a bottle of blue fingernail polish we thought was 99 cents, but it rang up for 37 cents.  I’m not sure if her eyes sparkled more as she celebrated the fabulous deal or later that evening when she showed off her blue manicured nails.

After buying the nail polish, Jessie noticed her favorite store was having a sale— the 75% off sign in the window was a sight to behold. “Dad, we need to go there right away!”

“Jessie, we need to buy sneakers, not lotions and soaps.” With a twinkle of her pretty eyes, shoe shopping was put non the waiting list. We left an hour later with a full bag of fragrant treats.

On our shopping trip, we finally found some sneakers for Jessie’s ever-growing feet. A few days later, I would question whether we needed that purchase when shoeless Jessie stepped onto our pollen-covered driveway in her socks and danced around in the yellow dust as if a light snow had fallen.

After paying for the sneakers, we browsed the department store.  “Dad, you’ve got to come and touch the softest thing ever.” “Dad, I love this coat.  It’s the softest coat in the entire world.”  Jessie repeated this several times, both before and after I purchased the green jacket for her.  The next morning, rubbing her hands up and down her plush-covered arms, she was still thrilled.  “I love my fuzzy coat.  I’m always going to have a fuzzy coat.  I’ll wear it in the summer and winter and when I outgrow it, I’ll give it to Momma and get another one.”

A few days later, our friend gave Jessie three bottles of perfume. Jessie sprayed the first on her wrists and rubbed them together. She spritzed the second on her mom’s wrist.  “Dad, I have one more to sample.”

“I don’t want to wear ladies’ perfume.”  I said the words— and meant them— but my muscles must not have heard because I held out my arm and Jessie sprayed it, then pulled it to her nose. She then dragged my hand, towing me behind, for her mom to sniff. The next morning, Jessie was still excited about her new perfume. Her mom, Mattie, sent her back to the bathroom to “tone down the scent.” I told Jessie it might be too much perfume if the teacher at the front of the room can smell her in the back row.

On the ride home, Jessie gave the radio buttons a workout, switching stations to catch songs she liked.  Her ears and mine don’t always appreciate the same sounds, but some of her music has grown on me.

At the beginning of our afternoon, before I ate my chili, I texted a photo of it to Mattie. Jessie’s enthusiasm was so contagious I had to share it.

When I finished the chili, there was a big hole in the bottom of the bread bowl.  For some reason, I felt compelled to take an “after photo.”  I picked up the bread and held it so that Jessie’s face was visible through the hole, then snapped the picture with my other hand.  When I said “Smile,” she smiled, but added, “Dad, don’t play with your food.”  I’ve taught my girl well.  She’s taught me, too— to use all my senses, especially a sense of wonder, to get the most out of every day. Until next month, remember to cherish the moments.

Patrick Hempfing had a 20-year professional career in banking, accounting,
and auditing before he became a father at age 44.
He is now a full-time husband, stay-at-home dad, and writer.
Follow Patrick at facebook.com/patricklhempfing and on Twitter @PatrickHempfing. 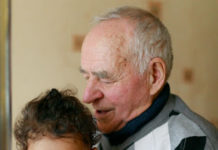 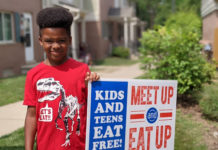