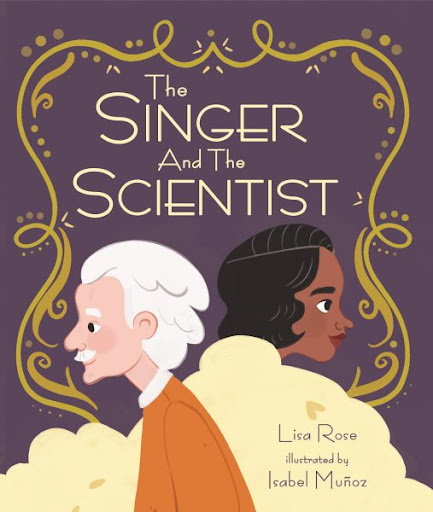 When University of Michigan alumna Lisa Rose wrote her 10th children’s book, The Singer and the Scientist, she knew it would be unlike her other books.

The Friendship of Anderson and Einstein

In 1937, Anderson – a Black woman who was one of the most famous singers in the United States at the time – sang at the McCarter Theatre Center at Princeton University in New Jersey before an all-White audience. Her performance was well-received. In fact, she was given a standing ovation.

Still, Anderson was denied lodging at the nearby Nassau Inn because of her skin color. She had no idea where she would spend the night. The same audience members who had given her a standing ovation only moments before refused to help.

Enter Einstein, who taught at Princeton. He invited Anderson to stay at his house, located in a predominantly Black neighborhood. Einstein, who was Jewish, left his native Germany once the Nazis rose to power. Both understood what it was like to be treated as an outsider in their own country. That night, they bonded over the discrimination they both faced and their love of music.

“Knowing (Einstein’s) history and everything I researched about him, this story rang true to who he was as a person. It was no surprise he was the only one to offer her a room for the night,” she said. “Einstein wasn’t accepted by the Princeton academic community because he was Jewish. He felt at home in a Black neighborhood because he felt like an outsider… Mostly, Jews and African-Americans were considered ‘outsiders.’ He could relate to them. That’s most likely why he stayed in that community and offered to have (Anderson) stay at his house. Nobody else rushed to her defense. It was only Einstein.”

Although Anderson was an important figure in the struggle for Black artists to overcome racial prejudice in the U.S. during the mid-20th century, she was a reluctant activist. All Anderson wanted to do was sing.

In 1955, Anderson became the first African-American to perform at the Metropolitan Opera in New York City and sang at the March on Washington on Aug. 28, 1963. She went on to win numerous awards, including the Presidential Medal of Freedom, the Congressional Gold Medal, and a Grammy Lifetime Achievement Award.

“She felt there was a point when she sang in D.C. that it was no longer about her and her wishes anymore,” said Rose. “It was about that higher goal, that she was the person who was called to do this at that time… She just wanted to be a singer – not a Black singer, not an activist.”

A Book for Everyone

Despite the themes of racism and prejudice in the book, that’s not its main theme. Rose stated it’s about the friendship of Anderson and Einstein – something kids can relate to and understand.

“These two have a common experience – racism and anti-Semitism – but really what they share is their love for music. You can be friends with someone who doesn’t look like you. I think it’s important that kids see that and see that representation. It’s a book for everyone,” said Rose. “I want to stress that Jewish books have been left out of the diverse books discussion and not considered part of that movement. I think it’s so important with anti-Semitism on the rise that all kids read this book. No, it’s not gonna convert you. No, you’re not gonna start observing Shabbat – they’re about our culture and understanding our culture. It shows what we have in common with other people who are also suffering.”

Rose is ecstatic about the renowned attention her book is getting.

“I’m happy the story is being recognized because it is an excellent example of allyship. We need more books depicting how seemingly different people can have much in common and can build friendships that help bring communities together,” she said. “I’m happy that even though the book was published by a niche Jewish publisher that it is being brought to a wider audience. This story is not just for Jewish readers. It is for all readers.”