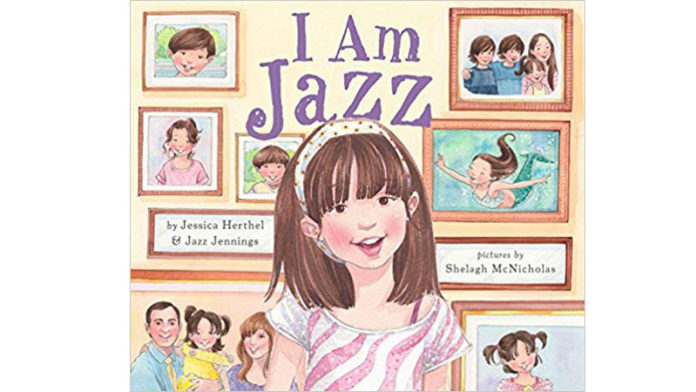 In December, the Washtenaw and Livingston Counties Transgender Task Force sponsored a “Countywide Day of Reading” of the children’s book, I Am Jazz, by Jazz Jennings. The book is about Jennings, a transgender woman, and her own experience growing up as a transgender child. There were several live readings in both counties. As a part of this Day of Reading, the Washtenaw County Health Department created a video featuring students and prominent county figures reading the book together.

This video was shown at different locations throughout Washtenaw County, including a reading on December 7 at all five of Saline Area School’s (SAS) K-5 elementary schools. This particular event was met with both praise and opposition from Saline students, parents, and community members. As a result, public dialogue about the book and the larger topic of transgender student welfare has been sparked.

About Jazz Jennings and the book

Jazz Jennings is an 18-year-old trans woman, television personality, author, and transgender rights advocate. In 2014, the Human Rights Campaign Foundation named her one of its Youth Ambassadors according to its website, hrc.org. Since 2015, she has starred in the reality television series, I Am Jazz on the TLC network which details her journey through adolescence, including the unique difficulties of being a transgender girl.

In 2014, Jazz co-wrote the children’s book I Am Jazz with Jessica Herthel, the director of the Stonewall National Education Project. The story details Jennings’s story of her childhood and her journey to being accepted as a transgender girl. In a video-reading of the book, Herthel gives a personal greeting to all those in Washtenaw and Livingston Counties involved in the reading series.

Ann Arbor Public Schools (AAPS) have also held school-day readings of the book, but only for students at one school, A2 STEAM at Northside. AAPS communications director, Andrew Cluley, explains, “Every classroom at A2 STEAM at Northside (a K-8 building) had a live reading of I Am Jazz,” adding, “the book is in the library at all of (the district’s) elementary schools and K-8 buildings.” Regarding the school and community response, Cluley reports that, according to A2 STEAM principal Meg Fenech, “the feedback was largely positive, with a handful of families opting out of the reading.”

Opposition reactions in the Saline community

When plans for the readings were announced, reactions in the Saline community were mixed. According to the Saline Post, there are currently transgender students at each of Saline’s elementary schools, and the school board saw this as a way of helping kids to be more accepting of their transgender peers. One voice, included in the Post’s article, is from a parent of a transgender teen and former SAS student who experienced bullying and a lack of acceptance at school and ended up attempting suicide three times.

Though many voiced support, others opposed the reading. According to MLive, a petition against the SAS reading received over 1,600 signatures in five days. The petition, authored by Afifa Corrigan, an SAS parent, states that “I Am Jazz” “is confusing to children, contradicts our faith community’s beliefs, and oversteps the school’s role.” It also mentions that “although we disagree with the clip (of the video-reading of the book) being shown, we encourage kindness and compassion for all students, especially those struggling with gender dysphoria.”

Another petition, by Stephen Gliske, an SAS parent, was created on December 6, the day before the video-reading. His petition was directed specifically toward the content of the book, since Stephen considered it to contain a number of scientific inaccuracies. Stephen and his wife, Tamie also created a webpage entitled “Correcting Myths in the Book I Am Jazz” where they outline their disagreements with the book. When interviewed by Ann Arbor Family Press, Gliske wrote that one of the major reasons he disagreed with the reading of the book is that “[he] felt the book was not inclusive of children with gender atypical behavior but who still identify with their gender.” He adds that “[s]uch individuals may feel marginalized by the book or that something is wrong with them.”

Similarly, as reported by a December 7 Saline Post article, some parents feel that the book’s content reinforces gender stereotypes. In her book, Jennings talks about being drawn to stereotypically “girl stuff,” such as dresses, the color pink, and mermaids. Other parent who opposed the public readings felt that the district should have announced the event much earlier to allow parents to consider whether their children should participate..

Saline administrators prepared different activities for students whose parents did not want them to participate in the reading. However, according to a more recent Saline Post article, between eighty to a hundred kids from each elementary school were absent on the day of the reading.

Amy Diebold, a mother of SAS Kindergartener, was supportive of the reading and SAS: “I was glad to see that Saline Area Schools was willing to participate in this event knowing that they would likely receive some negative backlash.” She identifies bullying as a major issue that schools and communities need to address. Yet, she doesn’t think that promoting anti-bullying in a general way is enough in this circumstance: “teaching acceptance isn’t as simple as general teaching kindness or not bullying” she says “but instead teaching about the experience of their classmates that may be different from their own, such that they may understand and offer kindness genuinely and with an empathetic heart.”

A mother of an SAS Elementary school student, who wishes to remain anonymous, spoke with Ann Arbor Family. She read about the the video-reading in a weekly email from her son’s principal. “It was listed as one of the items in the email,” she says “which was shocking to me because it is a big deal and they just had it in a routine email that many people probably don’t even read.” The decision to show the video-reading at her son’s school upset her because “even if I thought my 7 year old was old enough to be enlightened on the topic of transgenderism/gender dysphoria, I definitely wouldn’t want him learning about it from a video that celebrates the topic.”

She adds that “we teach our children to be kind and accepting of everything — all races, all genders, all different religions and viewpoints. So if the school really wanted to focus on making sure everyone is accepted, the video should have been on bullying and kindness.”

Roz Keith and Stand With Trans

Keith does not live in Washtenaw County, but was able to attend a weekend I Am Jazz reading at Liberty School in Saline, on Saturday, December 8. “The reading was great!” says Keith. “It was well attended; there were a lot of families there. When the readings were over they had activities for the kids while the parents sat for a Q&A session. There were no protests. It was all very supportive.”

When asked what she thought about the in-school Saline readings, Keith, who is the mother of a trans teen, shared that “It’s about education. This is one area that children need to be educated in. The more education there is, the more acceptance there is for transgender children.” Roz added that “I thought it was unfortunate that the district felt the need to give parents an out and that so many parents held their kids back from school that day.”

Since the video-reading was shown, opinions have continued to circulate in the community. On December 18, 2018 for example, several Saline students, parents, and community members on both sides of the issue had a chance to voice their opinions to the school board at a SAS Board of Education meeting. Speakers were each given three minutes to contribute to the dialogue.

When asked about the impact of the event on the Saline community, the SAS parent we interviewed who opposed the reading, says that there was a lot of anger and disappointment from families who opposed, but that “things have cooled down since then . . . and [she thinks they] all hope that if there is an issue like this in the future, it will be handled differently.”

Amy, a SAS parent who supported the reading, responds to the same question that “there was a lot of uproar, frustration, and then [she] felt there was some disappointment for some people that there wasn’t more general support for the reading.” Speaking from her own perspective, she “sincerely [hopes] that at least one child who is struggling with bullying for their gender identity or sexual orientation sees all of the people who supported the reading.”

Steve Laatsch, Assistant Superintendent of Instruction and SAS District Spokesperson, in response to an inquiry concerning the event’s impact, responded “[t]he event went very well in all the buildings. As a District, we will continue to value and respect the diversity that exists across our student body.”

To find out more visit standwithtrans.org

Events for Trans Youth and Families

“Share the Love” is an event for trans youth and their families. There will be a taco bar, music, games, and more. Bring a dish to share.

Be The Light
An event series for Jewish Families with LGBTQ Children. All are welcome.

“Be the Light” is an 3-event series for Jewish parents/caregivers/families who have LGBTQ children. Contact Roz Keith (roz@standwithtrans.org) for more information.
March 9th, April 7th, and May 7th
standwithtrans.org/upcoming-events/be-the-light/