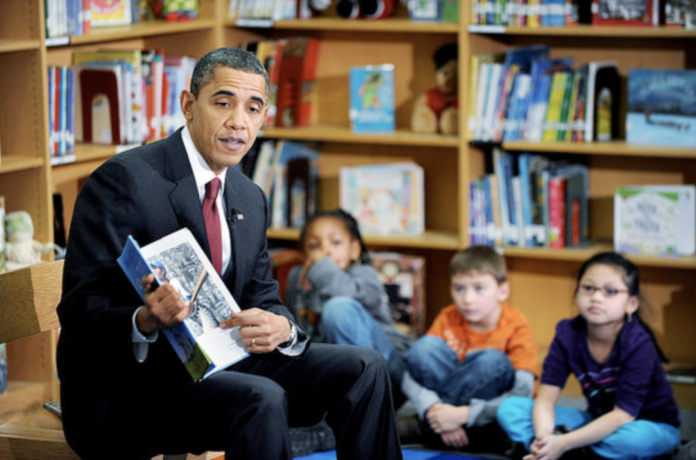 44th President Barack Obama’s birthday is August 4th–what a perfect opportunity for your family to enjoy Black-centered TV shows, books, and to consider the actions and conversations your family is having around diversity and antiracism!

Marquise, a Black doctoral student pursuing a joint PhD in English and Education, suggests that parents consider the importance of ensuring their children are reading books with non-white protagonists. “It’s important that both students of color and white children see non-white heroes reflected in their literature.”

Another area that Marquise suggests parents pay particular attention to, and an area that has garnered a lot of awareness in the literature world with hashtags such as #OwnVoices, is ensuring that parents and children alike pay attention to who is writing those books. Marquise says, “Make sure those books are written, if at all possible, by writers that come from those cultures they are writing about, so they aren’t perpetuating a white understanding of non-white experiences.”

Fantasy and sci-fi genres are significant genres–especially since they have developed to be so much more influential in the past 50 years, according to Marquise’s research which was recently published in The Children’s Literature Journal. Marquise says, “Fantasy and sci-fi are particularly important because of the ways they imagine places that are far beyond the real world. They help us imagine better futures, ones where humanity has achieved more.”

If you want to engage with Black-centered media for your child, what are a couple TV shows and books you can check out?

One of our favorite TV suggestions for preschoolers is “Ada Twist, Scientist.” This is produced by Barack Obama himself, as well as Michelle Obama. Based on the popular book of the same title, Netflix describes this show as: “Pint-sized scientist Ada Twist and her two best friends are asking big questions — and working together to discover the truth about everything!” Inspired by real-life STEM women Ada Lovelace and Marie Curie, this delightful show features a scientifically-minded, inquisitive young girl. Motown Magic is another gorgeous kid’s show highlighting Detroit’s Black culture and the joy of Motown music by following Ben and his magical paintbrush.

There are quite a few wonderful TV shows for highschoolers that feature Black characters. First Kill features queer highschoolers, one’s a vampire, one’s a vampire hunter, and the vamp hunter is Black. Dear White People is a dramedy following Black students at a predominantly white Ivy League university. Sex Education features a gay Black character who powerfully (if at times problematically displayed) explores his strength and identity. Race: Bubba Wallace is about the only fulltime Black driver, how he drove in NASCAR, and what happened when he stood up against racial injustices. Blackish, if somewhat controversial, features a father raising his children around white, upper-middle-class neighbors, while struggling to understand and create a cultural identity for his family.

My Hair is Magic is one of my favorite Black-centered children’s books, about a girl who has fantastical flowing hair with illustrations that could be framed, they are so lovely. I am Enough highlights developing empathy, loving yourself, and loving others. Lullaby (for a Black Mother), featuring a poem by Langston Hughes, is a gentle poem spoken to a child by their loving mother. Last Stop on Market Street is about a young boy who rides the bus every day, and begins wondering why he needs to take the bus with his grandma and can’t ride in a car.

For older students, Pet features a Black partially-mute girl, Jam, in a utopian world who is told that “monsters” no longer exist but have been replaced by “angels”–but Jam begins to suspect that may not be the case. The Hate U Give is about Starr who witnesses the fatal shooting of her best friend by a police officer, and the national aftermath that ensues and impacts Starr and her family. A Song of Wraiths and Ruin is described by Epic Reads as: “West African folklore-inspired fantasy with a slow burn romance” and features vengeful spirits, assassinations, and resurrection. Paradise on Fire is about a young Black girl who is traumatized by the fire that killed her parents, caught in a wildfire at her summer camp and needing to rise above her terror to keep her friends alive.

If you’ve enjoyed all of these, check with your local bookseller, such as Literati (whose staff is extremely knowledgeable about great book recommendations) or Nicola’s Books for more antiracist book suggestions!